Start a Wiki
Welcome to The Unwanteds Wiki!

The Unwanteds Wiki is an encyclopedia of people, places, and events that are portrayed in The Unwanteds series, written by Lisa McMann, who is known particularly for her works in the fantasy genre.

Fanfiction and speculative writing should be kept in user blogs only! (or better yet, the Fanon Wiki)

This wiki is incomplete, so feel free to help out!

The centre of wiki news

All the latest news on The Unwanteds series and the wiki.

Notices from the active powerusers will appear here.

Everything you need to get started on the wiki.

While the nature of writing about fictional works requires a certain amount of flexibility, ad hoc decision making, and some policies may be subject to change, we do maintain a set of rules. They can be found over on this page.

Our wiki needs updating! Go to a random page and start fixing articles! Or, go to the Wiki Insights page. To write a new article, just enter the article title in the box below and click the button.

New users should familiarise themselves with the Rules before beginning editing. The home page has absolutely everything you need on it, so it's always good to check there for anything you need. If you need a question answered, you should contact the relevant poweruser (don't know who to ask? Check in with an admin).

Note: users marked as inactive should not be contacted as powerusers, only personally. If in doubt, ask an active adminstrator.

Mr. Today is the creator of Artimé and is the twin brother of former High Priest Justine and father to Claire Morning. He originates from Warbler Island. He and Justine started to plan Quill when they were fourteen. He also removed the memories of their magical powers from the first people of Quill. They were returned in Island of Silence.

Soon after Marcus and Justine robbed the memories of the mages, Justine took the position of High Priest. Marcus and Justine decided on Positions in Quill, although they were mainly influenced by Justine, which is evrident in the Unwanteds. Marcus put all the Unwanteds outside the Walls of Quill under a sleeping spell. This continued until his daughter, Claire Morning, was announced an Unwanted. He then proceeded to make the Great Lake of Boiling Oil and Artimé for her in order to save all who had been deemed Unwanted. 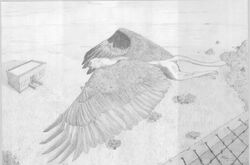 Simber as drawn by Swiftpelt33.

The pages with the most views in the last week are:

The Unwanteds Fanon Wiki is the place for all your fan creations, ideas, and role plays. Check it out!

To discuss further, visit this page

Go to these sites for info or for help with your own wiki!

Want your community included? See how!

Retrieved from "https://theunwanteds.fandom.com/wiki/The_Unwanteds_Wiki?oldid=16744"
Community content is available under CC-BY-SA unless otherwise noted.